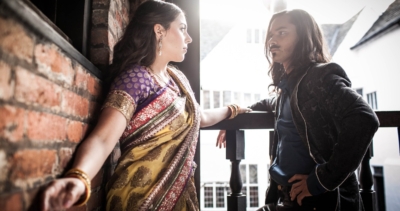 “This month we went to Bedford Theatre to see a touring production of William Shakespeare’s Cymbeline performed by Phizzical. This show gave us many surprises, not least with its contemporary Bollywood setting! The small cast of six multi-roled superbly and brought this lesser-known play to vibrant life. Everyone felt very satisfied with the happy ending after the twists and turns of the plot finally drew together. And we all loved the costumes. They were so beautiful and colourful with incredible detail”
Imogen, Year 10/11 GCSE Drama
St Andrews School, Bedford

“Saw Phizzical stunning adaptation of Shakespeare’s Cymbeline last night. Don’t think ‘Bollywood adaptation’ does it justice as this was not pastiche (as some Bollywood adaptations can be) seemed more classical Indian with all its clever intra-cultural storytelling, sophistication and glamour. Anyway, highly recommended – catch it if you can.”
Em Hussain

“Even though I don’t get Shakespeare, @cymbelineuk is rather good! I can follow it and it makes sense of what’s going on!”
Devesh Sodha

Because few have the vision or guts to grapple with it’s complicated story. I’m glad @phizzical put that right @cymbelineuk

@PrabsHunjan ..But also a good set and vibrant costumes. Great job by @phizzical for turning something not that well known & giving it a S.Asian twist.

@bradfitt Congratulations to Samir and the company @phizzical for tonight’s performance of Cymbeline in Coventry, coming to @CurveLeicester soon

“the best thing I have seen in a long time”

“My wife and I saw the play in Belgrade Coventry.We really enjoyed it. Now my wife and I can plan to see it again as well as knowing where and when the rest of my family will get to see it too. “