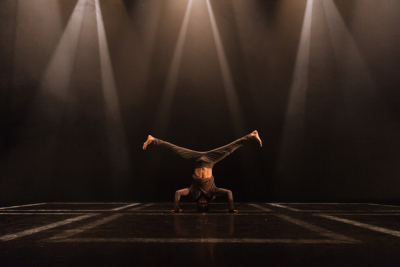 Metamorphic explores the idea of identity to portray how every individual is indefinitely morphing identities to be recognised and accommodated in today’s global world.

It looks to dissolve constructed images to acknowledge one’s cacophonic identity. Global access to travel and rampant technological advances have redefined ideas of home, belonging and an individual’s place in the wider, multicultural world. We are endlessly switching languages, gestures, mannerisms, tastes and preferences to fit changing social and political contexts.

Subhash’s work effortlessly fuses both classical Indian dance practice and contemporary forms. There is real sophistication of technical, design and musical languages; and the work is dramaturgically robust and accessible; with the final piece in his triple bill (Fly from) most especially moving through forms and from lightness to darkness with real fluidity. Subhash is a gifted storyteller through movement and we at Curve are all very excited to see how his work develops.

“Subhash’s dance skills are extraordinary and it is these that he is so distinctively attempting to deconstruct.”

That he is a unique and fascinating voice within dance that is striving to adapt, invent and transform tradition is undeniable.

‘Game Changer’ is a triquetra of dance choreographies put on by Morph Dance Company that come together to show a compelling perspective on life, death, and everything that comes in between.

I had the pleasure of seeing it on Saturday 21st October during the Inside Out event at the Curve Theatre, Leicester; and it is safe to say that the performance did exactly what it said on the tin. It is a game changer.

Subhash Viman Gorania began his performance in ‘Three’; the first of the trio. The light bulb swinging pendulously from the ceiling of the studio set the scene for what was to be a performance like nothing I’ve ever seen.  Sinuous movements were heightened by shadows, as Subhash began a dance which felt incredibly raw and animalistic. His dynamism made me feel almost uncomfortable as I saw his progression through life and back again.

After a brief pause, ‘Metamorphic’ began. The marriage between contemporary and traditional Indian dance was immediately evident and was captivating. Arm work fast as lightning made me feel like I was entering into another realm where normal physics didn’t apply. I was delighted to find humour in this performance and was impressed by Subhash’s ability to evoke a variety of feelings and responses in his audience.

In the second part of the show, I found Andy Hamer’s lighting to be what stole the show. So simple and yet so effective, the lighting encompassed what I felt to be the intent of the piece, and heightened Subhash’s steps. Every move he made felt intentional; no finger or toe was moved without thought or meaning.

At the interval, my friends and I looked at each other, rendered speechless by what was proving to be a performance ripe with personal intention and meaning. We spent the twenty-or-so minutes talking animatedly about the brilliant interaction between every element of each part; and having absolutely no idea what to expect from the final part of the show.

It wasn’t until we’d been sat back in our seats in the studio for a few moments that I realised that Subhash was moving through the audience. As everyone filtered back in following the intermission, he moved onto the stage and continued to move around – the performance had begun before anyone even realised it had. Music including the Sound of Silence by Simon & Garfunkel drew everyone back in, and ‘Fly From’ proceeded to conclude the show.

For me, ‘Fly From’ was the most fascinating and thrilling part of the show. On stage costume changes and intense, powerful movement created a story of breaking free from internal restrictions, and the journey of finding and following your intuition. I found myself gasping unintentionally at the magnitude of exploration occurring before me.

The choreography for ‘Three’ was by Subhash and TJ Lowe jointly, ‘Metamorphic’ by Subhash and Veena Basavarajaiah, and ‘Fly From’ by Saju Hari; and it is all to be lauded. I found every dance evocative of emotion both positive and negative, and loved it for that. Never have I seen a dance performance quite so thoughtful and scintillating, and I am excited to follow the work of all the artists involved.