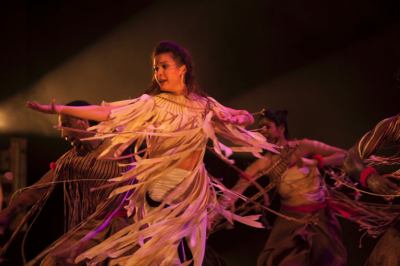 A show inspired by the ancient Indian philosophy of Tantra where shiva (the male principle) and shakti (the female principle) coexist in every atom of the universe.

In its dormant state, Kundalini Shakti is represented by a coiled snake, nestled at the base of the spine. When this energy is awakened, it ascends through the 7 chakras to unite above the crown of the head with Shiva. This consummation creates an experience of bliss. This Kundalini Shakti in each one of us, unites us and connects us in the dance of Shiva.

Daksha Sheth Company carved a prestigious reputation for themselves in the world of Kathak for 20 years before the company began to explore a range of movement idioms and performed with excellence in so many diverse styles. Today, being in the field of dance 45 years, Daksha as the choreographer draws from her experience in Kathak, Mayurbhanj Chhau, and Martial art of Kalaripayattu from Kerala, aerial technique of Mallakhamb to aesthetically combine tradition with Contemporary Indian Dance.

The Sangeet Natak Akademi awarded her for Daksha creative and experimental explorations in the field of dance on 28th September 2010. Each of her dance productions has been a product of such experiments and together they represent a continuous evolution of a dance language. This evolving dance vocabulary is the signature of her work: Daksha Sheth Company was the first to introduce aerial technique (since 1996) in the Indian dance and she blends it beautifully into her own productions.

Moreover, each production has radical changes in the context of: music costume, staging, themes, music, lighting design etc.  Daksha Sheth’s choreography which along with the conceputaluization, visual and aural direction, has seen the birth of some of the most exciting and visually spectacular productions to have come out of India, which have earned critical acclaim both in India and abroad.

As a dancer and choreographer, Daksha strength comes from her command and love of rhythm, a natural flexibility and balance and an instinctive capacity to project a range of emotions from sheer joy to vibrant power. She wants to capture the vitality and rawness of folk and ritual performing arts, and combine this with the sophistication and precision of the classical forms and has developed an entirely original movement vocabulary over the years.

An excerpt from her diary: ” I am a gambler by nature, and love the risk of experimenting, improvising, trying new things, both in life and in art. I am comfortable with uncertainty, and enjoy moving in new and unknown territory. I enjoy success, but I don’t fear failure.”

The Daksha Sheth Dance Company has presented their Indian contemporary dance work in more than 30 different countries and in more than 25 international festivals.

Isha is the lead dancer in the company and is a leading aerial dancer in India today.  She has trained for over 15 years in Kathak, Chau, Kalaripayattu, Yoga, Rope and Pole Mallakhamb.  Isha is also an actress, her latest film, Luck by Chance, was directed by Zoya Akhtar and released in February 2009.

The Classical Indian forms I have studied, like Kathak (a dance form developed during the Mughal period) and Chhau (a dance form developed during the pre-colonial era) are over 100 years old. Beautiful as they are in their classical state, I do not identify with those formats, which is why I feel that contemporary Indian dance, even though in its nascent state, is a relevant means of dance expression. Preservation of our heritage by making it more identifiable to our day and age is what will take us forward. Completely dismissing classical forms and aping the West is not something I would want to do, for my body is an Indian one and I want to do contemporary Indian work, which appeals to the people of my generation using our rich, ancient Indian heritage and tradition.

The training Isha have undergone like the rest of the company involves multiple classical dance forms, Yoga and Martial arts that contribute to the signature dance style of the Daksha Sheth Dance Company.